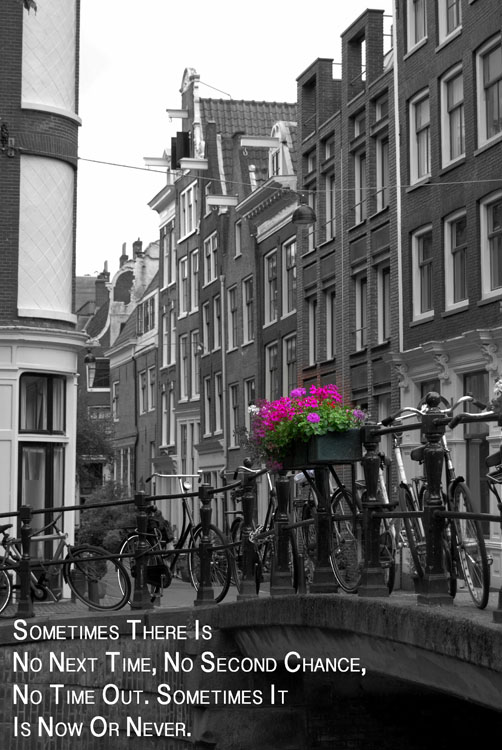 In 1994 I was given the opportunity to study musical theatre performance at a prestigious theatre school in New York City, in lieu of attending a university here in Canada. With my parents’ blessing, I chose New York. I was 19 years old and very hungry for life; to make something of myself; to express my creative voice; and to live a life in theatre. It felt surreal at the time of my decision, and it wasn’t until I left my tiny northern Ontario community, and travelled with my parents via Amtrak to New York City that the realization sunk in. This was a life-altering decision. No regrets.

I lived in Manhattan for 2 years, returning home just for the summertime. I had the full intention of remaining in New York to carve a niche for myself in the world of theatre, so I applied [and was approved] for a student work Visa. I began auditioning. I found an apartment. My dream was coming to fruition. I was excited. I was nervous. And again, I was hungry. I was ready for my chance. I was ready to try. That was when my first ‘diagnosis’ came in. An ultrasound I had undergone earlier that year detected a mass in my abdomen and I needed more tests performed. So, shortly after my graduation I returned home, where further analysis revealed a tumour the size of a baseball in my ovary. The doctors were fairly certain the tumour was benign, but we had to wait for a pathology report to be done [post-surgery] to be sure; and the location of the tumour meant that I could lose my ovary, which further meant that I may never be able to have children. I was shocked. I was devastated. I was scared. I was 21 years old and faced with the possibility of having cancer and of being stripped from the choice to bear a child. This was not a reality I anticipated upon graduating from school to begin my life in theatre. My life was dramatically altered by a circumstance beyond my control. My mom and I drove back to Manhattan where I packed up my belongings, handed back my apartment key, and moved home to prepare for surgery. I remember watching the city from the rear window of our car, through the raindrops and grey skies, as it faded into the distance. I was going to make it back. I was … but I never did. Regret. I remained desperate to return to New York City, but with no money to do so, and still weakened from the surgery (in which the tumour was benign), I decided to pack all that I owned into the backseat of my borrowed Ford Festiva, and move to Toronto. I knew no one, had no connections, no job, and only $80 in my bank account. I did, however, have determination. 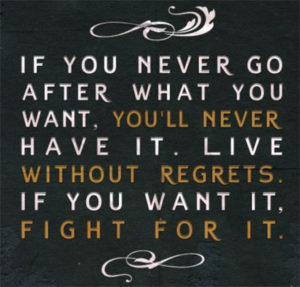 In 2010 I made a difficult but necessary decision. I had been living in Toronto for 14 years, struggling to etch out a career in the performing arts. I did work. I toured children’s shows, I filmed movies and commercials, and I was a unionized actor, but I was struggling. I couldn’t support myself on an actor’s pay, and I was well into my 30’s. I was frustrated. I was exhausted. I was restless. I sacrificed so much to be in this profession and I was tired of all the sacrifices I was making. I was collecting and harbouring regrets, and it was turning me into a jaded individual. I didn’t like who I was becoming. I wanted more for my life. I wanted to see the world. I wanted to have experiences outside of my city walls. I wanted to see the places I read about, and walk down the streets I saw on films. So I quietly removed myself from the business that was depleting me. I took a hiatus and found a full-time job that was flexible and enjoyable. I saved up money so that my husband and I could travel. In a span of 3 years we managed to visit Chicago, Newport, New York City, Boston, Paris, Amsterdam, The Swiss Riviera, and the Maritimes (where he was filming). That may not seem like a lot of travelling to some, but my husband and I were both from the performing arts industry, so to us it was monumental! We worked very hard to have those adventures; I read travel books; I memorized the city streets, and to this day I can still visualize them; I learned the basics of French and attempted to learn Dutch; and I built an extensive photo journal of our journeys. I felt fulfilled through my experiences of exploring these diverse cities, countries, cultures, and cuisines. Absolutely no regrets.

Fast-Forward to today and I am so grateful I took those adventures. I am grateful that circumstances beyond my control [back in 1996] led me to the life I now lead. I will never know what could have been if I had returned to New York City, but I know that I would not want to give up what I currently have. No regrets. Even through the cancers, the surgeries, the and the hurdles that I have experienced along the way, I know that I am lucky to have this life. In hindsight I realize now that I took chances. I took leaps of faith. I had the courage to try, and succeed as well as fail. I followed my heart. I followed my dreams. I put myself out there. It hasn’t been easy but it’s been an incredible and enriching experience thus far. And isn’t that just it? Life; it’s the everyday things we do, it’s where we commit our time, our energy, and our love for. It’s that chance to make the choices that – in your gut – feel right; to take that leap, to trust your instincts, and to have faith. Every experience that you allow yourself to have, and every experience that you own – whether good or difficult – shapes the person you become. It’s not about following the masses and wanting what someone else has, it’s about growing, enriching, and nurturing your life. It’s about having no regrets.

So please. Live life. Have courage. Trust your instincts. Follow your dreams. Have no regrets. Because life is transitory. Having cancer taught me that.