Parenting Through a Milestone 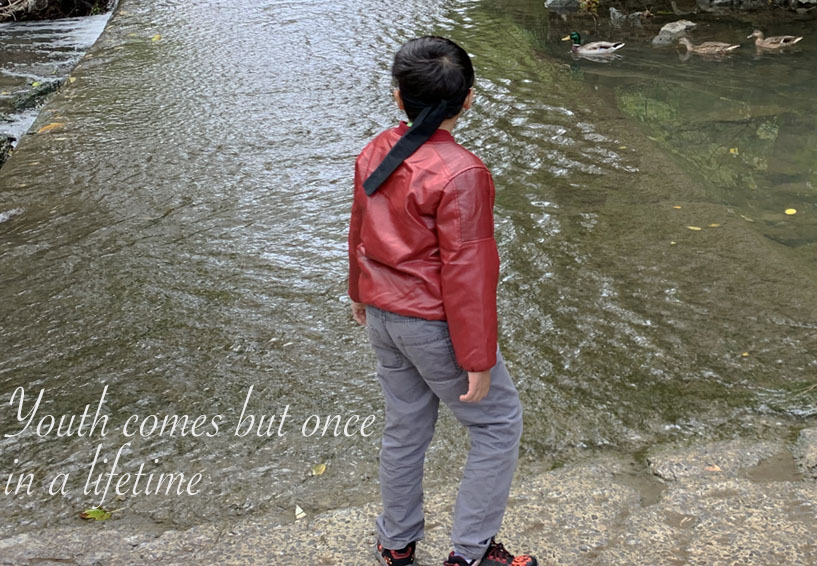 Parenting Through a Milestone

It has been awhile since I’ve written a post about parenting – more accurately – parenting through a milestone. And so, with that in mind, I thought I would share three fun facts about the age of eight going on pre-teen.

My son has always personified favourite characters. In grade 1 it was all about Marty McFly. He had the signature outfit – a jean jacket and puffy vest just like Marty. In grade 2 it was all about Darth Vader, which thankfully [somehow] morphed into Johnny Lawrence (it’s easier to outfit a ‘Johnny Lawrence’ than a ‘Darth Vader’). Now in grade 3, Johnny Lawrence remains alive and well – from the copycat hairstyle, to the black headband (made with love by Grandma), to the Cobra Kai jacket (custom-assembled), to studying martial arts. My son idolizes Johny Lawrence. To him, Johnny is the epitome of cool. And so, each day we endure the painstaking hair styling, the arguments about outdoor wear – But Johnny wouldn’t wear that. It’s not cool., to the numerous pleas to dye his hair blonde and straighten out the curls. Is this a pre-teen thing? In some ways, I believe it is. In grades 1 and 2 he was content to simply have an outfit that looked similar to his beloved movie character [at that time], but in grade 3 it’s all about transforming into the movie character – the exacting hairstyle, the clothing, the jacket, the attitude, the martial arts. He is very particular with his appearance – his style – and if it isn’t just so, then big frustrations are tantamount. But it’s more than personifying a character. It’s truly about finding a style that compliments his personality. Quite recently we bore witness to him assembling a birthday party outfit – black turtle neck, blue jeans, ring, neck chain, bracelet, and as a final touch, his Cobra Kai coat. He created a style just for him and pulled it off with suave sophistication – mature and stylish – he exuded confidence. It was quite impressive because he created the ensemble all on his own, which leads me into Fun Fact #2.

Fun Fact #2 – It’s all about Independence.

Although my son still requires a lot of attention, he has developed a stubborn streak of independence. His I’ve got this mom has me both proud and wistful. I am proud that he has developed confidence within himself and his own abilities, and sees it through, but also wistful because it means I am not needed in the ways I have grown accustomed to. I find I am in unfamiliar parental territory, trying to find my foothold. It can be challenging because his independence wavers – one moment he is of the can do attitude and another moment he is of the cannot attitude at which time he requires full-on assistance. It is a rapid shift of direction, which is tricky to navigate. Hand-in-hand with this streak of independence is his need to assert his independent ideas and ways of behaving. He frequently pushes his limits and tests his boundaries with me. It isn’t that he is trying to be disrespectful or rude, it’s that he is trying to find his own way – where he fits in, how he fits in, and how he can assert his own ideas and thoughts into his personal realm. He is stepping out from under my wing. It can often make for moments of frustration and annoyance, especially when he is acting out at the most inappropriate of times. However, I also recognize that his unique voice needs to be heard. We have always listened to him and included him in family decisions such as: what activity we should do together, where we should order take-away from, or what movie we should watch. But now, I include him in more [age-appropriate] decisions. If they are big decisions, then I teach him how to weigh the pros and cons and I encourage him to think them through, as well as make good choices. These discussions are not always easy and/or smooth. He is impulsive, and he often wants to act – not think – and he doesn’t always want to disclose or share the decision made – he wants to run with it. Therefore, as a result, we frequently experience tempers and tears while we work through the pushback and his insatiable stubbornness, which leads me into Fun Fact #3.

My son is a sensitive soul, and very good at expressing his emotions, whether it’s tears, tempers, laughter, or worry. He doesn’t hold the emotions back. So, over the years we’ve worked diligently at providing a safe space where he can retreat, to work through his feelings, or we will sit together and talk about what he is feeling and why, and then work together to find solutions on what we can do to make it better. We not only encourage him to express his emotions, but also to explore the reason he is feeling them. I always reassure him that it is normal and natural to feel anger, fear, sorrow, laughter – all the emotions within all the ranges – but our responsibility lies in how we express those emotions so as not to hurt ourselves or others. This has always been a challenge, and continues to be. He is not physically aggressive, rather he is hurtful with his words. However, I see more maturity shining through. Yes, the big emotions are still ever-present and ever-expressed, but he is slowly grasping the concept of expressing them with mindfulness. He is learning to reflect upon the situation that created his intense reaction and learn from it. It is a slow process, however it is a monumental development. Our challenge – more specifically my challenge – is to remain calm through his storm, and avoid matching the intensity of his emotions. I have to remind myself to listen without judgment or reaction, and let him know when he has done a good job in communicating how he is feeling and why. However, I also have to remain firm in our boundaries, and tell him when he is being hurtful, disrespectful, or disobedient. It is a balancing act of emotions.

The onset of pre-teen is, to say the very least, an interesting transition to bear witness to and a feat to parent. Parenting though this milestone has it’s challenges. I am exhausted most times, trying to remain present and calm, picking the battles carefully, and doing what I can to always be available to my son, as a confidante, an ally, and a mother. Sometimes it’s a lot of fun, and sometimes it isn’t. And it’s only the beginning of this bewildering phase. However, I can say this with certainty, I wouldn’t miss a single moment of each of these astounding moments, no matter how arduous they are.

Parenting Through a Milestone. Published by Crystal Joy Hall